HAGATNA, GUAM – JA Guam announced today that 2019 JA Company Program has concluded. This island wide high school program unlocks the innate ability in students to fill a need or solve a problem in their community by launching a business venture – unleashing their entrepreneurial spirit.

An awards ceremony recognizing this year’s students’ accomplishments was held at the Bank of Guam Headquarters in Hagatna on Saturday, Jan 18. Awards presented include:

Company of the Year – PASIADOT, sponsored by United Airlines

2nd place Company of the Year – Geftao, sponsored by Bank of Hawaii

Product of the Year – Pasiadot, sponsored by United Airlines

Beth Lizama, Executive Director of JA Guam said “Both Pasiadot and Geftao will represent JA Guam at the JA Asia Pacific Company of the Year competition in Tumon, Guam in March. This annual celebration of success allows young people from this region to demonstrate their business acumen and spirit of entrepreneurship in a competitive environment which will engage business, education and regional leaders as well as the media. On behalf of the JA Guam Board of Directors, thank you to our company sponsors, students, parents, teachers, GEDA, and all our corporate donors who helped make this program successful.”

Junior Achievement of Guam is a non-profit organization that has served more than 5,000 Guam students since 1976.

Let Their Success Be Your Inspiration!® 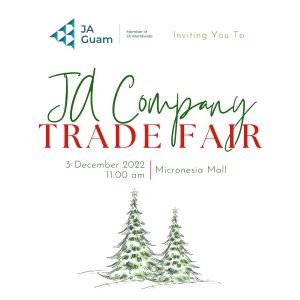 Your donation will be used to continue providing valuable programs to our island's students from elementary to high school.